I stepped outside the airplane door with a slight stumble. My eyes weighed heavy, and a peculiar odor emitted itself from my body as I raised my arms to stretch. My brain, whirring noticeably slower than usual, managed to weakly loft up a plan: immigration, bicycle, SIM card, taxi, sleep.

I accomplished the first four steps while dragging my feet back and forth across the airport, and I finally lugged myself into the back of a large transportation van with my boxed up bicycle. The pitch blackness of the vehicle lead to an early onset of the final step. My head slowly fell forward in sync with my eyelids drawing to a close. As my driver turned the vehicle onto a bridge, my cabin was flooded with light. With a slight scowl, I picked my head up and peered out the window to find the source. Across the body of water was a grand building illuminated by a myriad of lights. Four large spires surrounded a network of ornate domes, building up to the largest dome at the center topped with a golden rod. My driver explained to me that this was a popular mosque, and I realized that this was the first mosque that I’ve ever seen in person. It finally hit me that I had actually arrived in Turkey to start my journey.

The first few days in Istanbul were about acclimation. Adjusting my senses to once again being in foreign lands, away from the familiarities of home. The sights, the smells, the tastes, all foreign. To my surprise, this adjustment came quite easy for me. In Istanbul, I was never too far from someone who spoke English, another foreigner, or fresh food and water. I just had to think about acquiring these comforts in a different way than I was used to. It all felt too easy, and I was itching to move on.

After I had had my fair share of kebabs and tired myself of seeing mosques, it was time to set off. I opted to take a ferry across the Sea of Marmara to avoid the famed “cyclist’s nightmare” that is Istanbul’s traffic on my first day of riding. Stepping onto the ferry, I carried with me an inexplicable grin. I think I was grinning in the wake of these past months of preparation finally being realized, or at the laughable insurmountability of my chosen journey, or maybe at the Turkish family who would not stop scanning me up and down. I think I was just grinning at my life. 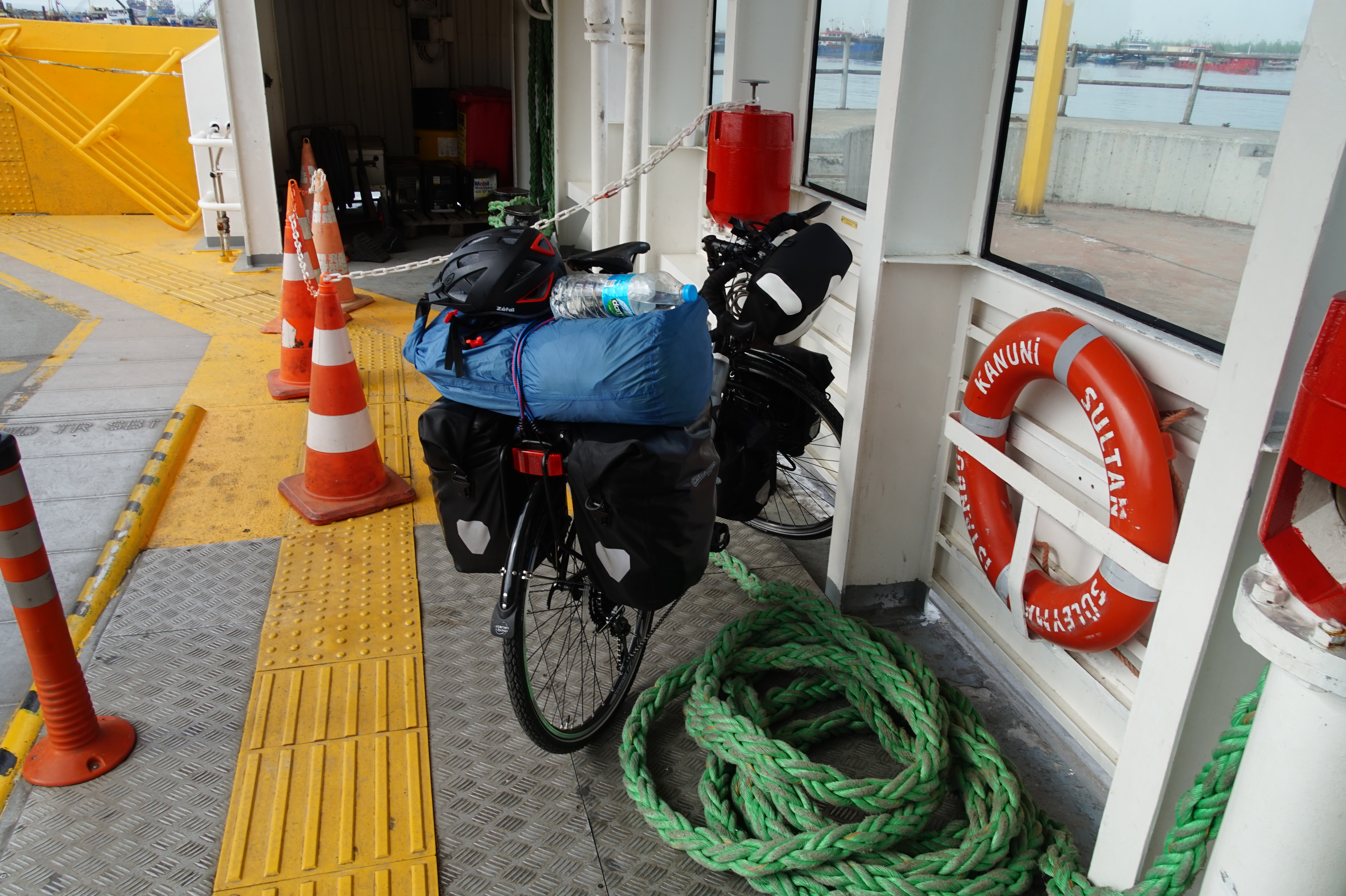 The ferry dumped me off in a city called Yalova. There stood a foreign white man with a stupid smile on his face, clumsily rolling his barely navigable, and way too heavy bicycle off of a ferry boat as a crowd of locals looked on wondering what in the hell he was doing.

“Alright then, which way is Singapore?”, I joked to myself.

No, actually, which way is Singapore? The first day on the road made one thing clear: I had absolutely no idea what I was doing. Maybe I’ll take this road out of the city. Nope, wrong way. How bad could a 15% gradient really be? Absolutely horrible. What will I do once those rain clouds reach me? Become soaking wet and miserable. I should have enough food and water to last until tomorrow, right? Wrong. I think this is how you set up a tent. No, take it all down and try again.

I found a strange beauty to my naivety. It was harmless, only bringing up trivial problems, and it propelled me on. I wasn’t thinking about all of the potential problems—all of the what-ifs. I was simply moving forward, knowing that, fundamentally, I was doing exactly what I wanted to be doing, and that any thought, feeling, or experience that arose in the meantime, I’d be able to overcome. That first night, as my bland dinner of red lentils and vegetables burped in a charred black pot under the stars, I sat back and treasured my naivety, knowing it was soon to fade. Without it, I’d be sitting at home wondering what I should be doing with my life. Without it, I’d be missing so much.

And so, on I cycled, making my way east at a crawl. Despite my optimism, I soon became laden by the brutal physicality of bicycle touring. No amount of prior online reading or at-home training could have prepared me for it. It may sound stupid, “Who knew cycling through mountains for 8 hours every day would be hard?”. But, I think I overestimated my physical preparedness and underestimated my knowledge of endurance-based exercise. I was constantly exhausted, and my legs regularly throbbed in pain.

One day, I powered up the final hill of a 30km upwards battle as the sun began its routine descent. The deciduous forest lined mountains gave way to a barren valley, and, in the distance, I spotted a small village, easily identifiable by the always-present spired mosque. With my face blank and legs whimpering, all that I could think about was getting food into me. Staring into the void, no amount of honking cars or howling semis could phase me; I had become singleminded. Coasting down the well-deserved descent, sweat drying in the wind, I immediately began to seek out some form of a restaurant. Though there appeared to be at least a hundred homes in this village, albeit quite decrepit homes, the village was as barren as the landscape around it—without a soul in sight. 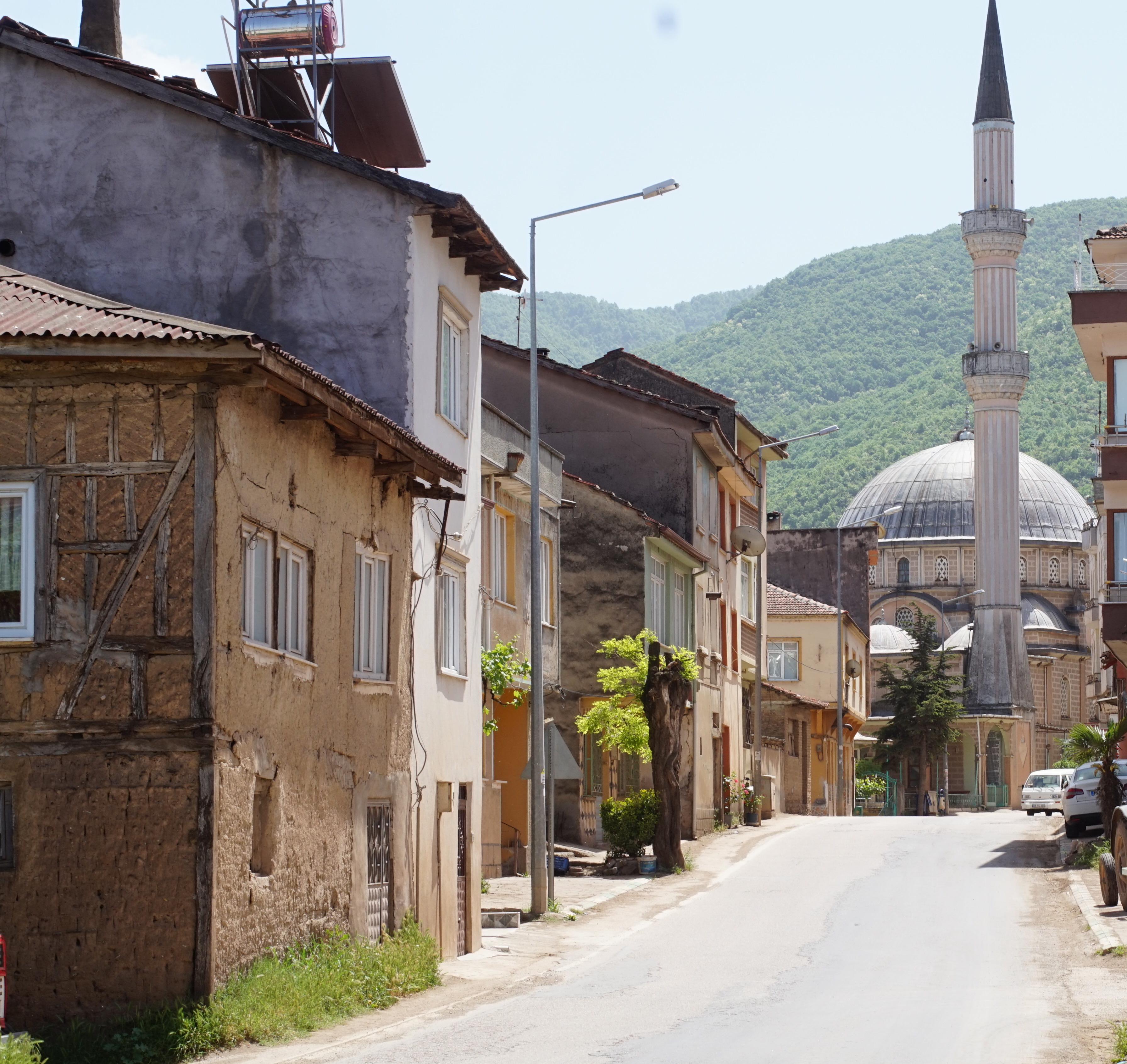 I rolled on to the end of the village where a lokanta (restaurant) sign revealed itself around the corner. My eyes filled with hope, and I parked my bicycle and entered the establishment. Two older ladies having an evening cup of tea greeted me. After some hand miming and confusing exchanges of unintelligible words, the point was gotten across that the restaurant was closed. Defeated, I sat on the curb outside rattling through my options for food. As merely the thought of cycling another kilometer jolted pain into my legs, my options seemed few. “Horses and cows eat grass, maybe I could eat grass too?”, I thought.

Then, the lokanta door opened, and a younger, smiling lady called out to me in heavily accented English, “Are you hungry?”. I nodded my head yes, trying not to seem too eager. The lady, Elif, sat me down with the two older ladies—her mother and aunt. I joined them in their evening cup of tea and more miming ensued as I explained my journey. They seemed impressed, but I knew they were just too polite to call me crazy. Pots and plates clanking in the room behind us interrupted our conversation. Elif entered the room with a tray carrying a banquet of food. Plates of sausage, cheese, olives, homemade bread, crepes, pastries, and other unknown items lay in front of me. I quelled my instinctive desire to savagely devour everything in front of me and politely tried each plate piece by piece. The family seemed eager to get my verdict on every item, but, honestly, eating anything at least half edible would have made me ecstatic at this point. Elif kept bringing out plate after plate of food, and the family didn’t seem content unless I was physically incapable of eating anymore. After partially digesting the onslaught of food and finishing my fourth cup of tea, I tried to give the family some money for my meal. They immediately declined, simply stating, “You are guest”.

I looked on to the orange painted horizon as the sun was nearing its descent. The family asked me where I was to go, and I explained that I would find somewhere to camp. Almost predictable by now, they refused to let me go and told me I could sleep in a spare room in their home. The father, who had now joined us after finishing his work and who was much more willing to call me crazy for my journey, showed me to a spare room complete with a broken lamp and dusty mattress. It certainly wasn’t luxurious, but it was everything that I could have wanted. I immediately fell asleep content, belly full, and baffled at the kindness I had just experienced.

Though I was continually pushing through physical pain, I found my days marked by these bizarre and exciting events involving the locals. A shepherd stopping me to show off his monstrous Kangal Shepherd dog, a passerby giving me handfuls of candy on the side of a busy highway, gifts of coffee and cookies from the semi drivers stopped at a gas station, or the usual call for “Çay, çay, çay!” (Tea, tea, tea!) ringing in the distance. These events added a dash of spontaneity to my daily routine of grinding out kilometers and packing my stomach with cheap carbs. Every day, I woke up looking forward to what this next stretch of road, village, or city would send my way. Every day, I was excited about what this lifestyle had to offer me. 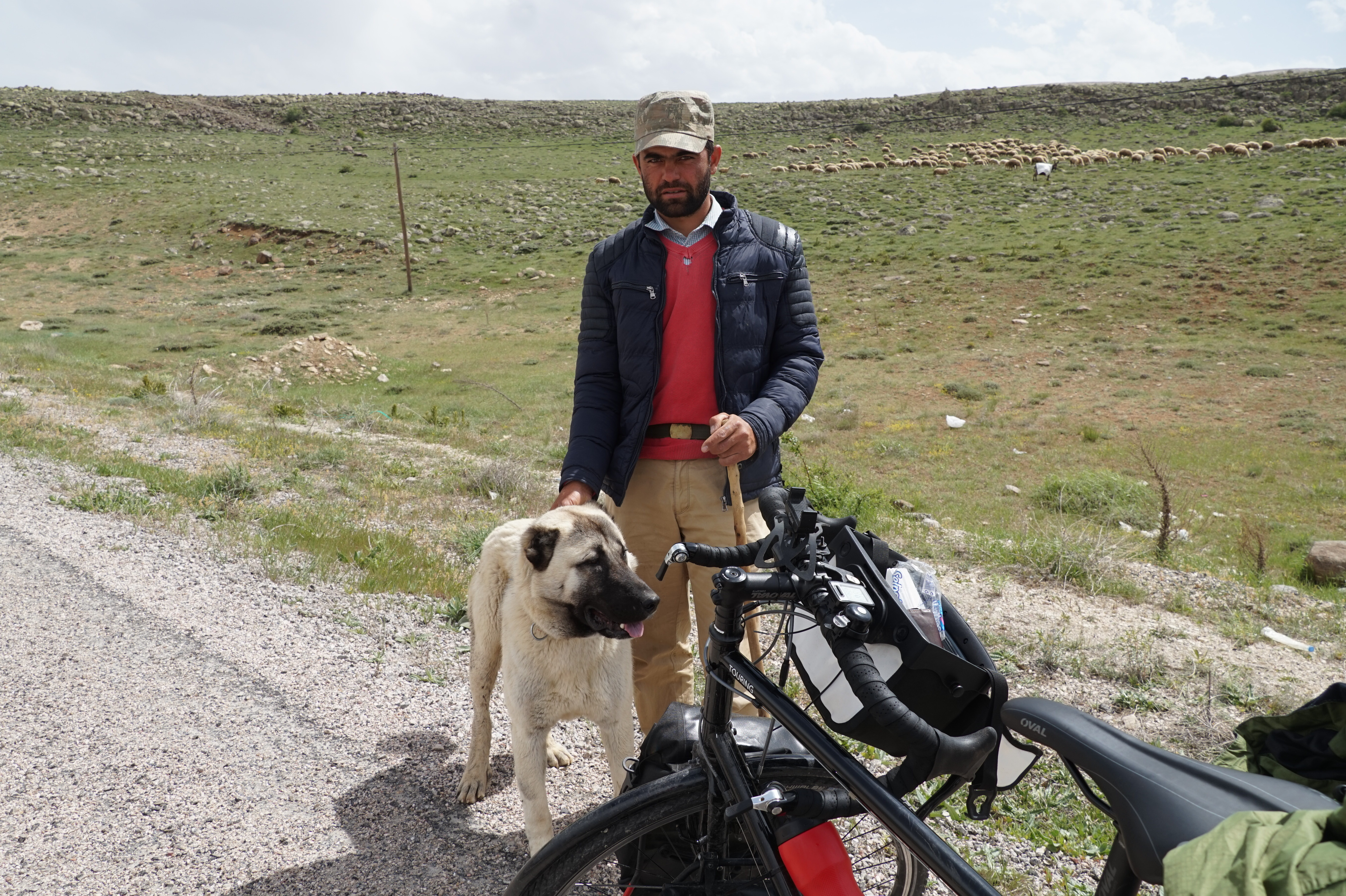 On my final full day in Turkey, I veered off the highway to a secluded dirt road that consisted almost entirely of large rocks. I bumped down the path for hours while my spine began to feel more and more compressed. To the left of the debilitating road were towering green hills dotted by shepherds and their livestock. To the right lie the dark blue Lake Çıldır, so entirely undisturbed that staring at its stillness for too long caused dizziness in my head. I set up camp on a cliff overlooking the lake and fell asleep to the sound of the shepherd dogs’ barks echoing down the green hills. 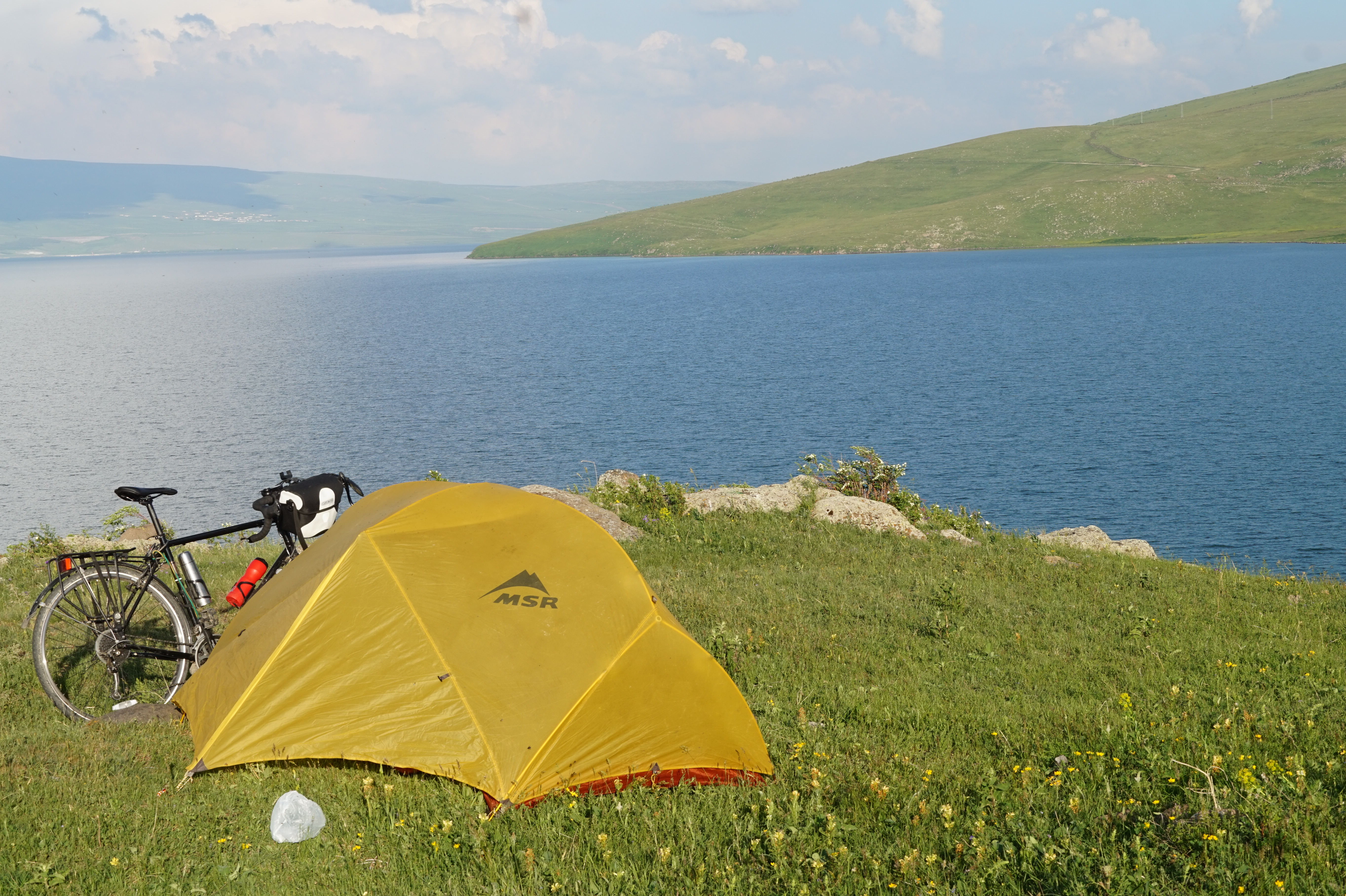 In the middle of the night, I was awoken by something stirring outside of my tent. I figured it may be a curious shepherd, however, I started to hear the breathing of an animal. With my mind still half-asleep, I began to remember the wolf tracks I had spotted in the muddy shore of the lake earlier that day. I immediately assumed the worst. Hugging my knife, I lay petrified in my sleeping bag as the monster outside sniffed up and down. Going through every scenario in my head, I somehow concluded that it was for sure to rip through my tent, and I readied myself for the confrontation. However, once my mind woke up a little more, I realized that my initial assessment may have been a bit off. I slowly unzipped my tent to reveal that the vicious monster outside was but a cow that strayed away from its herd. The cow stared blankly at me as it chewed its grassy meal, and I belted out a sigh of relief as if I had just had a near-death experience. With the adrenaline slowly leaving my body, I found it amusing that, out of everything to happen on my trip thus far, this nonexistent wolf encounter elicited the most fear and danger from me. 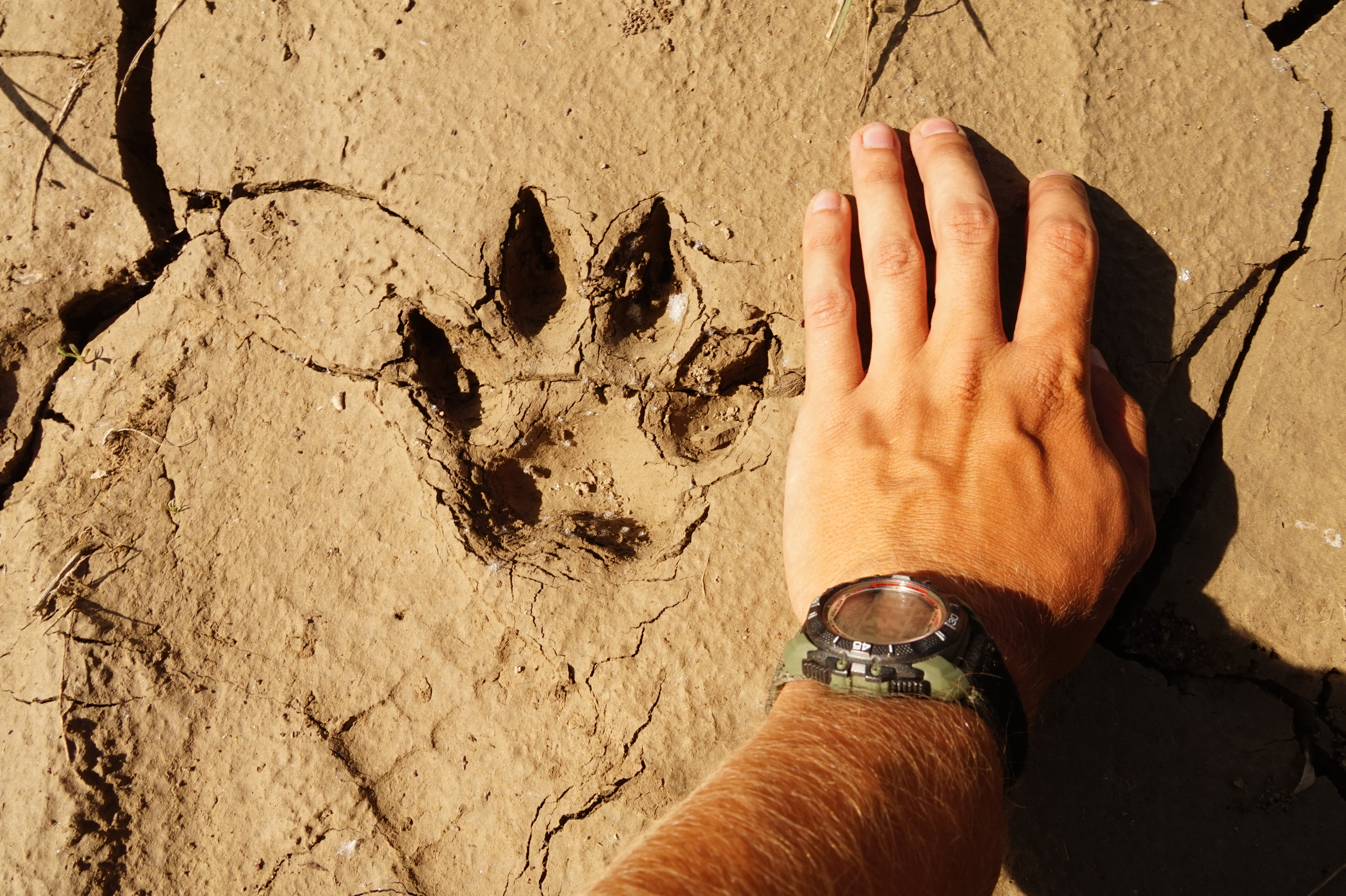 The next morning, I set off from the lake, snickering at last night’s debacle. The road ahead of me winded up a grassy mountain, still damp from the morning’s dew, leading to the Turkey-Georgia border. After five weeks in Turkey, my legs were a little stronger, my senses a little more attuned, and my confidence a little more refined. I pushed my way up the mountain with the memories of the past one thousand miles nostalgically echoing in my head. However, as I spotted the border post accompanied by new lands in the distance, I eagerly sped on. The unlimited possibilities of the many more thousands of miles to come caused me to look ahead, rather than behind. The adventure was only just beginning.